When Peter entered, Cornelius met him
and, falling at his feet, paid him homage.
Peter, however, raised him up, saying,
“Get up. I myself am also a human being.”

Then Peter proceeded to speak and said,
“In truth, I see that God shows no partiality.
Rather, in every nation whoever fears him and acts uprightly
is acceptable to him.”

While Peter was still speaking these things,
the Holy Spirit fell upon all who were listening to the word.
The circumcised believers who had accompanied Peter
were astounded that the gift of the Holy Spirit
should have been poured out on the Gentiles also,
for they could hear them speaking in tongues and glorifying God.
Then Peter responded,
“Can anyone withhold the water for baptizing these people,
who have received the Holy Spirit even as we have?”
He ordered them to be baptized in the name of Jesus Christ.

Beloved, let us love one another,
because love is of God;
everyone who loves is begotten by God and knows God.
Whoever is without love does not know God, for God is love.
In this way the love of God was revealed to us:
God sent his only Son into the world
so that we might have life through him.
In this is love:
not that we have loved God, but that he loved us
and sent his Son as expiation for our sins.

“I have told you this so that my joy may be in you
and your joy might be complete.
This is my commandment: love one another as I love you.
No one has greater love than this,
to lay down one’s life for one’s friends.
You are my friends if you do what I command you.
I no longer call you slaves,
because a slave does not know what his master is doing.
I have called you friends,
because I have told you everything I have heard from my Father.
It was not you who chose me, but I who chose you
and appointed you to go and bear fruit that will remain,
so that whatever you ask the Father in my name he may give you.
This I command you: love one another.”

Lectionary for Mass for Use in the Dioceses of the United States, second typical edition, Copyright © 2001, 1998, 1997, 1986, 1970 Confraternity of Christian Doctrine; Psalm refrain © 1968, 1981, 1997, International Committee on English in the Liturgy, Inc. All rights reserved. Neither this work nor any part of it may be reproduced, distributed, performed or displayed in any medium, including electronic or digital, without permission in writing from the copyright owner.

Today’s readings are all about love, specifically love of God. In the First Reading we hear St. Peter tell Cornelius that “God shows no partiality. Rather, in every nation whoever fears him and acts uprightly is acceptable to him”. It did (and does) not matter if a person was Gentile or Jew, all were accepted into the faith of Christ Jesus so long as there was genuine faith in Him.

In the Second Reading John reminds us that God is love; it is only in Him and through Him that we know love. He loves us so much that He sent His only Son to die for our sins. And why? So we could live eternally with God in Heaven amidst the Trinitarian love of the Father, the Son, and the Holy Spirit. It is the love of the Trinity that compels and allows us to love others and bring them into the faith of Christ. We are called to participate in this Trinitarian love by bringing others into it. We show others the love of God by loving them.

We hear even more about this love from Jesus in the Gospel. Christ Himself tells us that the love He shows us in his Passion and Death is the greatest love the whole world has ever known: “No one has greater love than this, to lay down one’s life for one’s friends”. He then tells the Apostles that He is sending them out into the world to share the Good News and to share the love of Christ with others. In the same way, we are called to do what the Apostles did: spread the Gospel that says that God loved us so much that He sent His only Son to save us and that what He longs for is for us to take part in that love eternally.

May we carry the love of Christ with us to all places and share His love with all people. 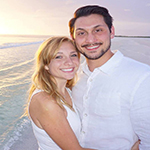 Dakota currently lives in Denver, CO and teaches English Language Development and Spanish to high schoolers. She is married to the love of her life, Ralph. In her spare time, she reads, goes to breweries, and watches baseball. Dakota’s favorite saints are St. John Paul II (how could it not be?) and St. José Luis Sánchez del Río. She is passionate about her faith and considers herself blessed at any opportunity to share that faith with others. Check out more of her writing at https://dakotaleonard16.blogspot.com.